National craft figures, Zainab Mamat, 76 have been involved with weaving activities as early as seven years old with a wage of RM4 per piece to cover family income. In those days, songket weaving was the main source of women in the village of Gelang Gajah, Kuala Terengganu. She said life in Japan was full of lack. Because of that, she was eager to lighten the family’s burden by looking for ‘pocket’ money.

“Every day after going home from school, she took a wage weaving songket with a salary of less than RM4 for a woven cloth”. She learned to weave from the mother, grandmother and the neighboring village who are proficient in weaving the cloth. “There was no formal education during colonial times. Just by observing and experiencing it, it makes me feel like a songket weaver, “she said when met at his home in Kampung Bukit Depu Jalan Panji Alam recently.

She added that it was more difficult when the perceptions of weavers were low status, uneducated and subordinates until there was a village friend who belittled his interest. Dedication received from Malaysian handicrafts in 2012, has been ‘persuaded’ the heart and proved his struggle for 64 years in the field of weaving art worth it. More proudly, his hands often receive orders from top leaders such as state leaders.

Throughout the business of songket terengganu which uses hand skills, she utilizes the skills to teach housewives and youth who are interested in learning it. “In recent years, I have opened the opportunity for housewives to work with me and more than 10 female workers take advantage of this opportunity.” But to learn songket weaving, the necessary features are interest, patience, and sincerity. Not everyone has such a feature especially young people while the generation of youth should continue the struggle to keep the songket up, “she said.

Although the price is offered cheaper than Terengganu’s original songket which can reach tens of thousands of ringgit, she still hopes that the community will appreciate the country’s heritage by supporting the original songket weaving. 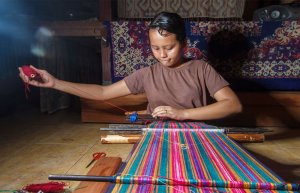 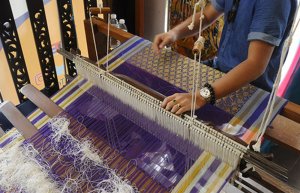